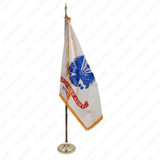 This United States Army Set includes a nylon flag decorated with three sides of gold fringe and a gold cord and tassel. This set comes with a two-piece oak flagpole with a brass joint and an Army spear ornament for a patriotic display.

This American-made official US Army flag presentation set is meant for indoor use at military bases, businesses, veterans association buildings, and more.

For the full effect, present this flag along with the American flag display set and any of our other indoor military flag sets.

Indoor military flags should be presented from left to right. The American flag is displayed first, followed in order by the U.S. Army flag, U.S. Marine Corps flag, U.S Navy flag, U.S. Air Force flag, U.S Space Force, and lastly the U.S. Coast Guard flag. The guideline for the order of precedence for these flags was established by the U.S Department of Defense.

In 1776, due to pleas from George Washington, the Continental Congress established a single standing force directly raised from all the colonies. This was the beginning of the regular Army.

Although it took many wars to become fully established, the Army is the oldest branch in the United States Armed Forces.