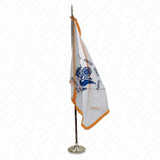 The Flags.com United States Coast Guard Flag Set includes a sturdy two-piece oak flagpole with a brass or chrome joint and an Army spear ornament. The U.S. Coast Guard flag colors are red, white, and blue; embellished with a three-sided golden fringe and a golden cord and tassel for a patriotic display.

This authentic, American-made US Coast Guard flag set is meant for indoor display at schools, conferences, places of worship, businesses, or a veteran’s association building.

For the full effect, present this U.S.C.G flag along with the American flag and any of our other indoor military flags. When choosing the best height pole for you, keep in mind that the ceiling must be at least one foot taller than the flagpole height.

Indoor military flags should be presented from left to right. The American flag is displayed first, followed in order by the U.S. Army flag, U.S. Marine Corps flag, U.S Navy flag, U.S. Air Force flag, and lastly the U.S. Coast Guard flag. The guideline for the order of precedence for these flags was established by the U.S Department of Defense. It follows the order in which each of these institutions were founded.