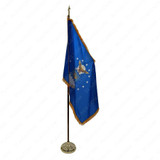 Display the same USAF Indoor Flag Set as the Air Force does to show honor and respect towards the troops! The U.S. Air Force flag set includes:

HOW TO: Displaying Military Flags Indoors

Click the link below for detailed instructions on how to set up this presentation flag set.

The U.S. Air Force's history dates to 1907 with the Aeronautical Division of the U.S. Signal Corps. As the world evolved, so did the Air Force, developing into a significant part of the U.S. Armed forces through the World Wars. In 1947, the U.S. Air Force was officially established as a separate branch of the American military.

The flag for this branch was created by Dorothy Gatchell and introduced in 1951. It consists of 13 white stars and the Department of the Air Force's coat of arms. The 13 stars represent the 13 original colonies. The three stars grouped at the top by the bald eagle crest depict the three Departments of the Department of Defense: Army, Navy, and Air Force.