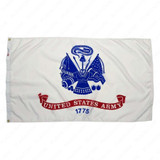 The Army is the United States' oldest military branch. It was formed one year before the country was founded, making the Army older than the United States itself! Celebrate the great heritage and strength of the US Army by flying the official US Army flag.

Almost 70 percent of all awarded Medals of Honor have been presented to Army soldiers. You heard that right, more than half of all decorated servicemen and women, across ALL military branches, serve in the Army. Additionally, 22 United States elected presidents served as Army soldiers.

About the Army Flag

The Army flag was officially adopted by President Dwight D. Eisenhower on June 12, 1956. The flag is decorated by a unique emblem paired with the motto “This We’ll Defend”. The Roman cuirass symbolizes strength and defense; the sword represents the Army weapon; the drum and drumsticks represent an intention to serve the Nation and its people; the Cap of Liberty, motto, and the scroll held by a rattlesnake, are often found on American colonial flags and declares the Army’s readiness to defend and preserve the United States.

About our Army Flag

Our Army flags are made in the United States with quality nylon or polyester material. The polyester Army flag is heavier and will withstand heavier winds outdoors.