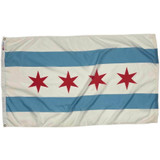 Chicago, one of America's premier cities, is known for its creative culture, sports, and commerce. The Chicago, IL flag is a classic symbol of the city by the Lake. Show your love for the Windy City with your very own Chi-Town flag!

Our Chicago flags are 100% nylon and designed for everyday use. The lightweight nylon material ensures your flag continues waving, even if it's not a windy day in the Windy City! The nylon construction and high-quality print hold up firmly with quick-drying and heat-resistant capabilities. All Chicago, IL, flags feature:

*Flagpole not included. Hoist your American-made authentic Chicago flag onto any of our outdoor flagpoles with ease with its sturdy canvas header with brass grommets. This flag is available in multiple sizes, but our most popular choice is 3' x 5'.

The site that would become Chicago was settled by French explorer Jean Baptiste Pointe du Sable in the 1780s; he's commonly known as the "Founder of Chicago." In the mid-1800s, Chicago rapidly grew from a tiny town to a bustling city. After surviving the devastating 1871 Great Chicago Fire, the city became an even more robust manufacturing and agricultural hub than before.
The Chicago flag itself was initially designed by Wallace Rice in 1917 with two stars; the other two stars were added in 1933 and 1939. Rice's flag is packed with symbolism, from its blue and white stripes to the four unique six-pointed stars.