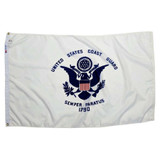 The United States Coast Guard is the only military organization that operates within the Department of Homeland Security. Unlike any other United States branch, the Coast Guard serves at all times, whether we are at war or peace. Proudly proclaim your service as a United States coastie by flying the official Coast Guard flag!

About the Coast Guard

The Coast Guard has been an active force in all U.S. wars and conflicts. Its fleet is one of the world’s oldest and its Cutters average between 47 and 54-years-old. The Coast Guard was founded in 1790 and has a distinguished history of versatile service. Missions include maritime security, drug interdiction, navigational aid, search and rescue, marine safety and defense, and interception of migrants.

About the Coast Guard Flag

The history of the Coast Guard flag is marginally unknown. The flag does not include the Coast Guard's official seal, instead, the flag features an eagle with a red and white striped, blue-capped shield on its breast. Beneath the eagle is the Coast Guard’s motto, “Semper Paratus” which translates to “Always Ready”. The date, 1790, is the date that the Revenue Cutter Service was founded – the predecessor to the United States Coast Guard.

About our USCG Flag

Coasties are, as the slogan says, always ready. They protect our coastlines, patrol our waters, and perform incredibly dangerous search and rescue missions. If you are a United States Coast Guardsman, we are proud to provide you with this American-made military flag, and thank you for your service.

Respect your Coast Guard flag - sleeves and fringe finishes should only be ordered on flags intended for indoor mounting sets and should never be hung directly onto your wall.