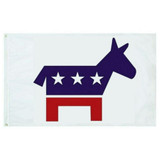 The Democrat Flag makes a bold statement about where you stand on many American issues. Whether you plan on using them for rallies, parades, or election night celebrations, this Democratic flag is a great way to express your views!

Our 3’ x 5’ Democrat flag is made in America with high-quality nylon, a canvas heading, and brass grommets to provide substantial durability so you can fly it proudly. We also offer a mini mounted 4” x 6”** version, a fantastic handheld alternative to the size 3’ x 5’. Regardless of what size you get, it’s an excellent way for individuals to show their support for their candidate running for office.

If you would like to display your 3’ x 5’ flag outside to fly proudly in front of your home, we recommend using our tangle-free flagpole which can be used at rallies & protests as well. Order both today to receive free shipping!

**Mini 4” x 6” Democrat flags are made of a silk-polyester and mounted on a 10” plastic black staff with a gold spear. No, not real gold.**

History of the Democrat Flag

Democrats have long touted the donkey on bumper stickers and campaign banners. The donkey has been the unofficial mascot of the Democratic party since just after the Civil War. In 1870, the cartoonist Thomas Nast drew a famous cartoon depicting the liberal Democrats as a lively, kicking donkey and the secretary of war Edwin Stanton as a dead lion. Though popular culture has immortalized this image over the decades, the donkey has never been officially adopted by the Democratic party. Nonetheless, it remains a classic symbol of liberal democracy and progressive politics across the globe.

Like its main rival, the Republican Party, the Democratic party has undergone several significant transformations throughout history. Though the Democratic party of today may seem young and modern, the party was founded in 1828 by supporters of Andrew Jackson – making it the world’s oldest political party that remains active to this day.

The Democratic party was initially the party of limited government, states’ rights, and the support of slavery. Things began to change for the Democrats in 1933, with the election of America’s 32nd president Franklin Delano Roosevelt and the emergence of the “New Deal” liberal democracy. After the Civil Rights Act of 1964 and the Voting Rights Act of 1965, the platforms and voting demographics of the Democrats and Republicans effectively traded places. Since the Civil Rights movement, the Democratic party has become the party of social justice, environmental protection, and modern liberalism – with a voter base comprised mainly of young and progressive voters.