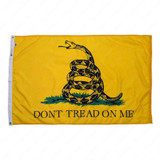 The Gadsden flag, both a comic illustration and a serious philosophy, is instantly recognizable as one of America’s oldest and most patriotic symbols. Since its inception in 1775 during the American Revolution, it has become one of the most iconic flags in American history. Indeed, the flag’s main image, the timber rattlesnake, is now as synonymous with American liberty as the bald eagle or the Springfield rifle. Though the flag itself can be found flying proudly from doorways and in front yards across the nation these days, the flag’s origin story is far less visible, and remains one of the more fascinating in revolutionary history.

As with certain other wild and uncharted colonies of the British empire (cough-cough-we’re-looking-at-you-Australia), Britain in the 1750’s had a bad habit of shipping convicted felons to the United States. Benjamin Franklin didn’t appreciate this, and in response, he proposed sending timber rattlesnakes to Britain. This humorous idea quickly picked up steam during the American revolution as the colonies began to take on their own patriotic identity. The rattlesnake itself became a symbol of freedom and resistance of British rule, and a drawing of the snake representing each of the 13 colonies was the first political cartoon ever printed in American newspapers.

The Gadsden flag today has come a long way from that original cartoon, but it is just as meaningful today as it was two and a half centuries ago. Made in America with 100% nylon, featuring clean-sewn edges and attention to quality at every turn, this flag is sure to inspire rugged American patriotism in anyone who lays eyes on it. The canvas heading and brass grommets make this flag sturdy and durable, while the range of sizes mean you can fly it anywhere you like, either in the garage or outside on your patio.

Make sure your flag looks the best it can look with the help of one of our tangle-free flag poles, which will help keep your flag flying high and bright on even the windiest of revolutionary days.

$1.25
This Gadsden sticker is great to put  on your vehicle! Made in America Decals are printed on waterproof, laminated, durable vinyl stock with UV (ultra-violet) blocking inks Non-permanent...
Add to Cart Quick view