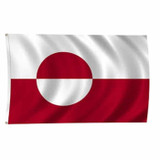 Greenland's flag is the only nordic country/territory without a nordic cross!

Capital: Nuuk
Language(s): Greenlandic
Currency: Danish Krone
Government: Parliamentary Democracy Within A Constitutional Monarchy
Flag Meaning: The flag's designer explained that, "The large white part in the flag symbolizes the ice cap and our fjords are represented by the red part in the circle. The white part of the circle symbolizes the ice bergs and the pack ice, and the large red part in the flag represents the ocean."