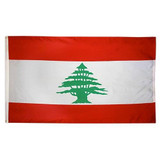 The cedar tree on the Lebanon flag honors the mountains of Lebanon cedars.

Capital: Beirut
Language(s): Arabic, French
Currency: Lebanese Pound
Government: Unitary Confessionalist Parliamentary Republic
Flag Meaning: The cedar tree, a national symbol since the 18th century, symbolizes peace and tolerance. The red stripes honor the sacrifices made, while the white stands in the peaks of Lebanon's mountains, which are often covered in snow.