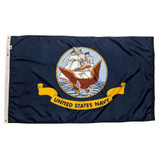 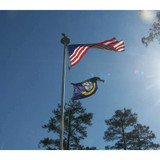 The U.S. Navy is the largest military force in the world. With 323,000 active personnel, 288 battleships, and countless other ships, carriers, cruisers, destroyers, submarines, and aircraft, the U.S. Navy has active operations in almost every major body of water, globally. This worldwide presence makes the Navy an incredible fighting force! Show your support by flying a United States Navy flag!

The U.S Navy was first formed in 1775 to defend the American colonies against the British attack. After the revolutionary war, the navy was dissolved. Soon thereafter, the United States found itself in need of a military response to pirates and nine years later, in 1798, the United States Navy was re-established.

America’s Navy is the nation’s front line in war and peace. They operate on, above and below the sea, and work to protect all the world’s oceans.

About the U.S. Navy Flag

The United States Navy flag was officially authorized by President Dwight D Eisenhower in 1959. The flag features a sailing vessel protected by the outstretched wings of a bald eagle. The emblem also includes a rope, an anchor, and the words “United States Navy” across a gold banner.

About our Navy Flag

We are proud to provide the official U.S. navy flag for sailors and their supporters. Our American-made US Navy flag is uniquely created and designed for indoor or outdoor use but make sure you respect the U.S. Navy flag - sleeves and fringe finishes should only be ordered on flags intended for indoor mounting sets and should never be hung directly onto your wall.