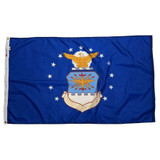 The Air Force is one of the most popular service branches in the United States military and, because it has the highest reenlistment rate of all military branches, it’s one of the most difficult to join! Are you an airman, or an airman hopeful? Fly the official Air Force flag to show your elite status and commitment to protecting our great nation.

About the Air Force

The United States Air Force is the United States’ youngest military branch. Officially founded in 1947 as an independent service, aerial forces were deployed as part of the Army as early as WW1. Only 4 percent of airmen are pilots; the majority of personnel work to defend the country's air, space, and cyberspace through mission support, security and law enforcement, and rescue missions.

About the Air Force Flag

The United States Air Force Flag consists of the coat of arms, 13 white stars, and the Air Force Seal all on an ultramarine blue background. The stars symbolize the original 13 colonies and the three stars found above the gold eagle also represent cooperation between the Air Force, Army, and Navy branches. The Air Force’s official color is ultramarine blue, to represent the sky. The gold found on the eagle and seal symbolizes the sun and the excellence required of its personnel.

About Our Air Force Flag

Our American-made Air Force flag is perfect for airmen, airmen hopefuls, and family members of those serving in this incredibly sought after military branch. Fly your USAF flag proudly, either indoor or outdoor, today!

Respect your Air Force flag - sleeves and fringe finishes should only be ordered on flags intended for indoor mounting sets and should never be hung directly onto your wall.

$47.90
Display your pride of your ranking with one of the Air Force Officer Flags! Made in America Authentic design 3' x 5' 100% nylon Extra stitching to prevent fraying Polyester canvas heading* Brass...
Options Quick view