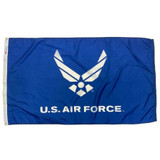 Since its creation in 1947, the United States Air Force has always aimed high to protect America. This American-made flag features the USAF’s official wings symbol and is excellent to fly high to show your pride!

Our Air Force Wings flag is made from lightweight nylon, perfect for all-around everyday outdoor use. This flag measures 3’ x 5’ and has a durable canvas heading and brass grommets that allow it to be flown on a 20’ flagpole or our house-mounted pole.

The authentic US Air Force symbol on this flag makes it ideal for showing your allegiance to the USAF.

Although it has only been an official arm of the United States Armed Services since 1947, the United States Air Force’s history dates back to the days of Teddy Roosevelt as the Aeronautical Division, Signal Corps, formed in 1907. Since then, it has changed names several times but has grown to become the second-largest US active service branch.

The United States Air Force wings featured on this flag were designated as the official symbol of the USAF in 2004.

$39.50
The Air Force is one of the most popular service branches in the United States military and, because it has the highest reenlistment rate of all military branches, it’s one of the most difficult to...
Options Quick view

$1.25
Display your support for the military branch of your choice with these Army, Navy, Air Force, Marine and Coast Guard stickers. Decals are printed on waterproof, laminated, durable vinyl stock with...
Options Quick view

$1.70
As a way to show your support for the brave men and women who serve in our armed forces, these Armed Forces Lapel Pins are a great way to do so. Showcasing each of the different branches of the...
Options Quick view