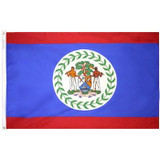 Share a little piece of Belize with this flag!

Motto: "Sub Umbra Floreo" / "Under the shade I flourish"
Capital: Belmopan
Language(s): English
Currency: Belize Dollar
Government: Unitary Parliamentary Constitutional Monarchy
Flag Meaning: The 50 olive branches represents the year (1950) in which Belize gained its independence, the red stripes were added when the independence was recognized in 1973, and the flag itself represents the unity of the nation's people.