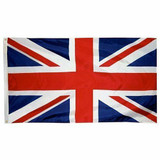 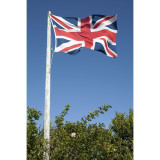 Fly the Union Jack to commemorate the rich history and legacy of the United Kingdom with this ultimate-quality nylon U.K. Flag!

Exhibit it in your classroom for history days, fly it at your business to show your heritage, hang it at your house to show your allegiance to Britain’s classic sports teams - just like Britain’s legacy, the sun never sets on great ideas for displaying this high-quality British flag.

Outdoor United Kingdom flags are made of lightweight nylon, great for everyday flying. The flag comes with brass grommets and a strong canvas header. The flag is made in America and comes in an array of different sizes. See the chart below to determine what size flag and pole suits your needs.

For indoor use, a sleeve and three-sided gold fringe option is available to make this U.K. Flag into a great display piece. Respect the fringe, these indoor flags are only to be displayed on an indoor display set, and never hung on a wall. The 3' x 5' British flag with gold fringe works with either the 7' or 8' indoor display poles.

HISTORY OF THE UK

The United Kingdom of Great Britain and Northern Ireland has been a combination of the countries of England, Wales, Scotland, and Northern Ireland since 1922 and is arguably the most influential country in modern history. From the nations that arose from its colonies to its staunch and stubborn resistance during World War II, to its cultural revolutions that swept the world, the U.K.’s fingerprints are all over the modern world.

Over the years the United Kingdom has given birth to many exciting and controversial subcultures. The Beatles, Churchill, Game of Thrones, pubs, punk music, Lord of the Rings, Doctor Who, Monty Python, Top Gear - just some examples of what Great Britain has given to modern culture and history.