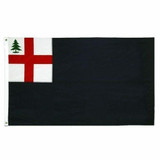 Add this Bunker Hill Flag to your historical flag collection!

The "Bunker Hill Flag" with the blue field was an error made by a person coloring flag charts a couple of hundred years ago. The flag, representing New England, was correctly printed with heraldic hatching to indicate a red field, but it was colored blue by mistake. That one error has lived to this day as fact. The report by the North American Vexillological Association in the 1970's concluded that the Americans probably didn't carry any flag at Bunker Hill, they were such a rag-tag outfit. The most famous painting of the battle shows a flag with the red field with green pine tree in a white canton, no cross.