Steps to fold the Flag

It depends on the weather and how the flag is cared for, but at minimum, it is expected to last 90 days. Well-taken care of flags can last longer though. Our Lock-Stitched American Flags are known to last longer than the industry average, sometimes exceeding one year. Polyester flags will last longer than nylon flags, but without enough wind they won't fly as spectacularly.

The flag must be illuminated if it is being flown after sunset or before sunrise. Check out our Solar Micro Light if you need to illuminate your flag.

The star field is cut out from the flag and then the two pieces are burned together. Local VFWs, American Legions, Girl Scout Troops, and Boy Scout troops usually have flag retirement ceremonies, just make sure to check with the one in your area. If you would like to save yourself a trip, we offer a free flag disposal service.

*As a rule of thumb, when flying one flag on a pole, the flag length should be a quarter the height of the flagpole. These are recommended sizes without any obstruction to flagpoles. If you have trees, gutters, light poles, fences, or any other object that might block the sight line to your flag, please use your best judgment to the size that would best fit your pole. If you have any questions or concerns, please do not hesitate to contact us by email or phone 800-858-8776.

Usually the flags should be at half-staff from sunrise to sunset, but on Memorial Day it is sunrise to noon.

When raising and lowering the flag, bring it to the top of the pole for just a moment before bringing it into position or taking it in for the night.

You can buy a mourning bow or mourning streamer for the top of your pole and that will represent half-staff.

The flag is saluted if:

According to the Flag Manufacturers Association of America, the header is not a part of the actual flag. In fact, the Federal Trade Commission mandates any flag 12" x 18" and larger have some sort of attachment to the header listing the origin of manufacturing. It is part of the business principles and practices for the flag industry to label flags to make re-ordering an easier process for customers. Disclosure of stamps are not listed on the websites of any National Independent Flag Dealer Association member, for a complaint arises once in a blue moon. Any customer choosing to forgo branded stamps on their flag's header may request so.

People in uniform, members of the armed services, and veterans should do the military salute. Non-military and non-uniformed persons should remove any head-wear and hold their right hand over their heart while facing the flag.

No, you should never mark the flag in any way. This includes writing words on the flag, drawing numbers or symbols, or attaching any kind of image to the flag. You are allowed to mark on the header of flag, seeing as it is not considered part of the flag, itself. 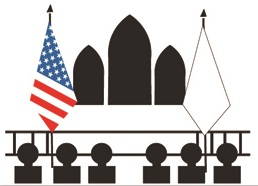 The American flag should always be to the left in the eye of the viewer. 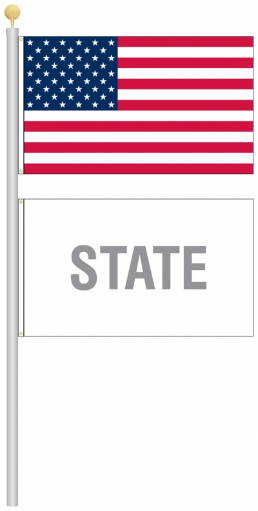 When flying a flag underneath the American flag, on the same pole, it should be at least one size smaller. 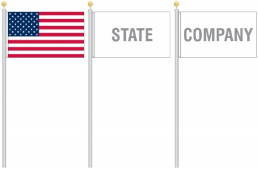 If flying next to state and company flags, the American should be the left. 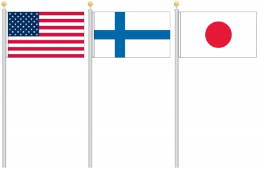 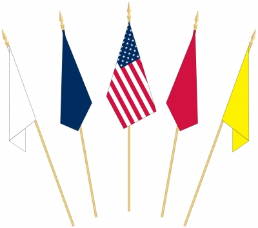 If you are putting the American flag between other flags, it must be in the middle or the highest point. 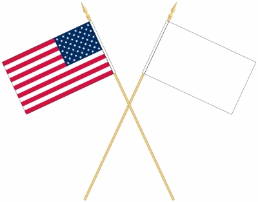 If you are crossing poles, the American flag should be on the right (the flag's own right), and its pole should be in front of the pole of the other flag 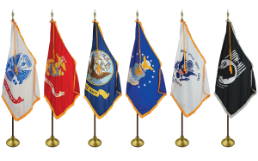 Viewing them from an observer point-of-view, left to right, they should fly Army, Marine Corps, Navy, Air Force, Coast Guard, and POW/MIA.

The first fold of our flag is a symbol of life.

The second fold is a symbol of our belief in eternal life.

The third fold is made in honor and remembrance of the veteran departing our ranks, and who gave a portion of his or her life for the defense of our country to attain peace throughout the world.

The fourth fold represents our weaker nature; as American citizens trusting in God, it is to Him we turn in times of peace, as well as in times of war, for His divine guidance.

The fifth fold is a tribute to our country, for in the words of Stephen Decatur, “Our country, in dealing with other countries, may she always be right, but it is still our country, right or wrong.”

The sixth fold is for where our hearts lie. It is with our heart that we pledge allegiance to the flag of the United States of America, and to the republic for which it stands, one nation under God, indivisible, with liberty and justice for all.

The seventh fold is a tribute to our armed forces, for it is through the armed forces that we protect our country and our flag against all enemies, whether they be found within or without the boundaries of our republic.

The eighth fold is a tribute to the one who entered into the valley of the shadow of death, that we might see the light of day, and to honor our mother, for whom it flies on Mother’s Day.

The ninth fold is a tribute to womanhood, for it has been through their faith, love, loyalty and devotion that the character of the men and women who have made this country great have been molded.

The 10th fold is a tribute to father, for he, too, has given his sons and daughters for the defense of our country since he or she was first born.

The 11th fold, in the eyes of Hebrew citizens, represents the lower portion of the seal of King David and King Solomon and glorifies, in their eyes, the God of Abraham, Isaac and Jacob.

The 12th fold, in the eyes of a Christian citizen, represents an emblem of eternity and glorifies, in their eyes, God the Father, the Son and Holy Ghost.

When the flag is completely folded, the stars are uppermost, reminding us of our national motto, “In God We Trust.”

After the flag is completely folded and tucked in, it has the appearance of a cocked hat, ever reminding us of the soldiers who served under Gen. George Washington and the sailors and Marines who served under Capt. John Paul Jones and were followed by their comrades and shipmates in the U.S. Armed Forces, preserving for us the rights, privileges and freedoms we enjoy today.

The side of the flag that has either a header or sleeve. This is the side that is raised or hoisted up a flag pole.

The side of the flag that is opposite of the hoist end. This side flaps end the wind and gets frayed after time.

A strip of canvas or canvas like material on hoist end of a flag. Flags with a header can be used indoors or outdoors. If you would like to fly a flag with a different configuration, just ask us and we can customize the location of the header.

Primarily for use with indoor flagpoles, the hoist end of the flag is folded over, and sewn to itself, to create a sleeve. If you would like to customize the sleeve configuration, just contact us for a quote.

A type of flag compliant with government specifications as required in the U.S. Flag Code, Title 4. These flags have a ratio of 1:0 and are most often flown on military bases and other government properties.

A flagpole ornament sits atop the pole and is mainly decorative. They can be made using different types of metal and usually either a ball or eagle.

The truck is the part of the in-ground flagpole that covers the top, holds the ornament in place, and includes the pulley to which the halyard is attached.

A flagpole halyard is a rope or a stainless steel cable that provides the ability to fasten a flag on the outside of the pole. The halyard also allows the flag to move up and down the flagpole.

This type of flagpole features a rope that goes from the truck at the top of the flagpole to the cleat where it is secured. External halyard ropes are made of diamond-braided polyester. This pole also has an exposed pulley.

This type of flagpole has a hidden halyard inside. This internal halyard is made of wired polyester rope or stainless steel. While internal halyard flagpoles are more expensive, they offer a cleaner look and added security. The halyard is only accessible through a door, locked with a key or winch.

The fact that these poles can quickly be shortening in case of inclement weather make them an economical option for high-wind areas.

This type of flagpole is an affordable alternative to external halyard flagpoles because most of them ship for free. They are not recommended for high-wind areas, but can be disassembled to prevent damage to flagpole and surrounding area.

A flagpole that is equipped with yardarms and/or a gaff. Freight charges apply to this kind of flagpole.

A rig, used on nautical flagpoles, that extends from of the flagpole and rises at an angle. The extension gives the option to have additional flag arrangements and flags. The gaff represents the mast of a ship.

A horizontally mounted, tapered pole that is attached to a vertical flagpole, creating a lower case “t” or a cross. These are usually found in nautical applications, but can be used anywhere.

These are hooks that attach the halyard to the grommets of the flag. Snaps can be made of nylon or zinc. Nylon snaps are used with sectional flagpoles. Zinc snaps come with vinyl covers, preventing that obnoxious clinking sound.

This is a hook-type fastener on the side of a flagpole typically used on external halyard flagpoles. Cleats can be attached directly to a flagpole, a wall, or another sturdy place. The halyard is tied around the cleat to keep the flag at the desired height. Internal flagpoles have cam cleats, named after the rotating or sliding piece in a mechanical linkage used for them to function.

This refers to the thickness of the tubing used to construct the flagpole. It can be simplified to the amount of aluminum used in the flagpole’s construction and is determined according to height and wind requirements.

The butt diameter is the width of the bottom of the flag pole. This measurement helps you decide if you should buy a flash collar or a shoe base.

This is a decorative ring that goes on the ground, separating the exposed and unexposed sections of the pole. A sealant keeps the flash collar in place and water away from the base of the flagpole.

A shoe base is an alternative support option to a flash collar that usually includes a set of anchoring bolts fastened to a slab of concrete. The shoe base also uses a welded casting situated over the anchoring bolts. The welded base casting is held in place with nuts, lock washers, and flat washers.

A tube made of PVC or steel that rests underground and is used to stabilize an in-ground flagpole. The ground sleeve also keeps the area around the base of the flagpole protected from the elements. Steel ground sleeves, with lightning spikes, are most common. The lightning spike acts to distribute any electrical charges into the ground, protecting the pole and the people around it. The product description for each flagpole tells you which ground sleeve is included.