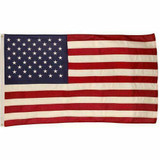 You’ve made it to the G-SPEC American flag! This means you are either a member of the US Armed Forces, work for the government, or you like the look of this government specification flag rather than the Outdoor American Flag.

The G SPEC US Flag was produced due to an executive order by the government that dictated the fly to hoist (length to width) ratio, the diameter of the stars, and the width of the stripes on the American flag in 1958. The order governs only flags that are displayed by the United States federal government. You can find these exact specifications in Title 4 of the United States Code, also known as the US Flag Code.

The G-SPEC cotton American flag is a heavy material that is mostly used for military funerals or inside displays. The cotton flag is not recommended for outdoor use because the color fades and the material wears faster under outdoor conditions than other materials.

$2.95
Mini American stick flags are affordable, versatile, and essential. Having a flag on a stick allows you to show off your patriotism anywhere. You can wave them at a parade, festival, or protest and...
Options Quick view

$39.90
Our easily assembled 6' x 1" off-the-house flagpole is adorned with a plastic gold eagle with a metallic finish and is engineered to include a built-in "free-spinning" top section that...
Options Quick view