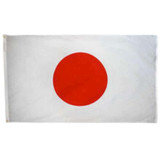 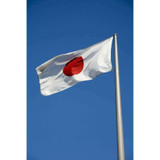 The rising sun flag is a symbol of Japan’s rich culture and contentious history. Honor the Land of the Rising Sun with the Japanese national flag! Our Japan national flag features several options for outdoor and indoor use.

Our flag of Japan is made with outdoor use in mind. Its lightweight nylon design not only ensures it’ll flap majestically in even a very light breeze but that it’ll stand up strong against rain, with quick-dry capabilities. Your Flag of the Sun will stand up strong to the sun, with a long-lasting and heat-resistant digital print.

Select the flag that fits your needs best from several options, but do note that our best-selling flag size is 3’ x 5’. A strong canvas header with brass grommets keeps your Japan flag safely and securely attached to your outdoor flagpole.

For the an honorable indoor rising sun display, apply a sleeve and 3-sided gold fringe to your Japan flag. It’ll make for a beautiful presentation piece, so treat it right and hang it from an indoor flagpole for a full indoor exhibition.

The indoor Japan flag with sleeve and fringe features:

The rising sun has long been a traditional image of Japan. Some of the earliest recordings to Japan as a “Land of the Rising Sun” come from the early 600s. The sun is tied deeply to old Japanese culture and mythos, linking the sun and the emperor directly. History ties the Hinomaru or “Circle of the Sun” flag throughout Japanese history; the earliest claimed Hinomaru flag is from 701, though it’s unknown if it’s the same design as the current Japanese flag.

The oldest still surviving flag of the current Hinomaru design dates from before the 16th century; legends claim it’s as old as the 11th century.

The current Hinomaru flag was originally adopted as a civil ensign flag in 1870. Its coloring was corrected and updated in the second half of the 20th century and the current red color was standardized and the flag finalized in 1999, starting a new chapter in the over millennia-long history of the Circle of the Sun flag.

The flag of Japan has met some contentious debate, stemming from Japan’s militaristic and imperialist past. Historic military banners and flags were based off the Hinomaru, muddying the rich history of the Japanese flag’s history.