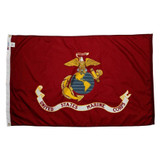 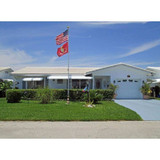 Our American-made military flags are a great way to declare your unwavering commitment to the protection and wellbeing of our great nation. Thank you for being one of America's finest warriors.

About the Marine Corps

About the Marine Corps Flag

The Marine Corps flag was officially adopted in 1939 even though the colors and emblem have appeared on uniforms since 1869. The emblem consists of a globe, an anchor, and a large golden eagle. The globe represents the marine's global influence, and the anchor pays tribute to the marine corps' naval heritage. The eagle, its wings spread wide and perched at the very top of the globe, symbolizes the United States of America.

About our USMC flags

Our Marine Corps flags are carefully crafted in the United States for either indoor or outdoor use. Make sure you choose the right finish for your flag usage! Brass grommets are great for outdoor use while sleeve and gold fringe finish is intended only for indoor flags.

Respect your Marine Corps flag - sleeves and fringe finishes should only be ordered on flags intended for indoor mounting sets and should never be hung directly onto your wall.

For information on how long your flag should last and how to increase its lifespan, check out our blog on flag care.