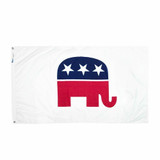 The Republican Flag makes a bold statement about where you stand on many American issues. Whether you plan on using them for rallies, parades, or election night celebrations, this flag is a great way to celebrate your conservative views. If you support American conservatism, a decentralized government, and free-market capitalism, this is what you need to make your voice be heard.

Our 3’ x 5’ Republican flag is made here on American soil with high-quality nylon, canvas heading, and brass grommets to provide substantial durability so you can fly it proudly. This flag is not one of those flimsy foreign-made mesh-like polyester flags! We also offer a mini 4” x 6” version, a fantastic handheld alternative to the size 3’ x 5’. The iconic Republican elephant logo has bright and vibrant red, white, and blue to contrast the white background. Regardless of what size you get, it’s an excellent way for individuals to show their support for their candidate running for office.

If you would like to display your 3’ x 5’ flag outside to fly proudly in front of your home, we recommend using our tangle-free flagpole. Order both today to receive free shipping!

One flag not enough for you? Make sure to check out our collection of political flags!

*Mini 4” x 6” Republican flags are made of a silk-polyester and mounted on a 10” plastic black staff with a gold-colored spear.*

Fun Fact: In 2016, the Republican Party called for a commission to look into the possibility of returning to a gold standard system. Meanwhile, we only accept all major credit cards and Paypal.

History of the Republican Party Flag

The term “Republican” originated in the late 1700s by Thomas Jefferson’s supporters who favored a federal government with limited powers and more authority spread throughout state legislatures. His political ideals have not wavered from the modern Republican Party. The Republican Party, also known as the Grand Old Party (GOP), was officially formed in 1854. Abraham Lincoln was the first person to run for election under the Republican Party.

The elephant symbolizes the Republican Party, and the flag displays it front and center. The centerpiece was first published as a political cartoon by Thomas Nast in 1874 in Harper’s Weekly, an American political magazine. There was no color identity of the Republican party until after the election in 2000. Major broadcasting networks consistently used red to represent which states the Republican nominee, George W. Bush, won during the presidential election.