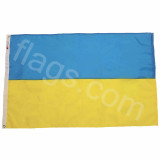 Show your support for the country of Ukraine with this premium Ukrainian flag. These flags are made in America with 100% nylon material that is durable and resilient. Equipped with a canvas header and brass grommets, this versatile flag can pair with any outdoor flagpole - including our popular tangle-free flagpole.

The History of the Ukraine Flag

The first national flag of Ukraine was adopted in 1848 by revolutionaries who wanted to be freed from the Austro-Hungarian rule. This flag was based on the colors of the coat of arms used by the city of Lviv. This coat of arms has a golden lion on a blue shield, an emblem dating back many centuries. In 1918, the decision was made to switch the stripes of the 1848 flag to reflect the symbolism of “blue skies over golden wheat fields.”

Later, in 1949, the flag changed under the communist regime. Ukraine adopted a flag similar to the Red Banner of the Soviet Union with its golden hammer, star, and sickle. The modification included a horizontal stripe of light blue at the bottom.

When Ukraine regained independence in 1991, the country changed the flag back to the blue-yellow banner in 1992. This flag remains the official flag of Ukraine.