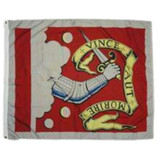 Our Bedford flags are made in America with 100% lightweight nylon and are designed for every-day use. The durable construction allows this flag to withstand rough weather conditions and sun exposure. The canvas heading and brass grommets make it easy for this 36" x 60" flag to securely attach to any of our outdoor flagpoles. Our Bedford battle flag features:

Historians debate whether the Bedford Battle flag was actually brought to the Battle of Lexington & Concord; nonetheless, it became a lasting symbol of the militia's resistance at Concord. Famous Massachusetts poet Ralph Waldo Emerson's Concord Hymn, about that fateful skirmish, likely references the Page family's tale in its opening lines.

The flag's actual origins are unknown, and historians debate (as they always do) whether it was truly a flag for a mid-1600s Massachusetts militia or if it was created in the 1700s. However, we know that the first recorded reference to the Page family's flag as the "Bedford flag" happened in 1875, when displayed at the centennial of the Battle of Lexington & Concord. Cyrus Page, a family descendant, later donated it to the Bedford public library, where it remains on display to this day. It's now the official flag of the town of Bedford, Massachusetts.