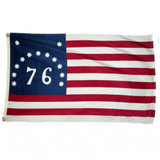 The Bennington flag is another one of those legendary American Revolution flags; like many of those, the story is much more remarkable than the history. Legend has it that a flag like this one, featuring a large “76” canton and 13 stripes, signifying the 13 rebellious colonies, was carried into the Battle of Bennington in 1777. That Battle is believed to be a significant turning point in the American Revolution in favor of the Revolutionaries. It’s also likely that the flag of the Green Mountain Boys was present, but this flag has an attractive, iconic design and a fun history nonetheless.

Our Bennington flag is American-made with 100% lightweight nylon and is constructed for everyday use. The canvas heading and brass grommets make it easy to attach to any of our outdoor flagpoles securely. Our Bennington 1776 historical flag is available in multiple sizes and features:

Bennington's Battle took place in New York state, about 10 miles from Bennington, Vermont. British General Burgoyne, leading British forces from Canada, devised a plan to divide and conquer American forces throughout New England, a hotbed of early revolutionary activity. As part of a 3-front pincer attack, he sent Lt. Colonel Baum with about 800 men and an additional support force through upstate New York.

The plan was interrupted when a force of 2,000 American rebels and nearly 400 Vermont militiamen decisively defeated the force and killed Baum in the fighting. This Battle and the subsequent defeat of Burgoyne at the Battle of Saratoga later in the revolutionary war helped bolster Patriot morale. It demoralized the British and showed the United States as a legitimate force, eventually leading the French to ally with the Americans.

Legend claims that the historic flag was carried off the field by Nathaniel Fillmore and passed down the Fillmore family to president Millard Fillmore. In 1877, descendants donated the Bennington flag to the Bennington Museum, where it is also known as the “Fillmore Flag.”

Many doubt the Fillmore flag's actual use at the Battle of Bennington and believe General John Stark’s Green Mountain Boys flag to have been there. Still, the Bennington flag has become more strongly associated with the Battle. Although historians may be correct, it’s fun to imagine this historic flag at such an extraordinary Battle in the Revolutionary War.

Like many Revolution era flags, the Bennington features 13 stars and 13 stripes, symbolic of the 13 American colonies that were in a state of rebellion against Great Britain. The Bennington version is easily identified by a large '76' in the canton, recalling the year 1776, when the Declaration of Independence was signed. Another distinctive feature of the Bennington flag is the arrangement of the 13 stripes, with white being outermost (rather than red being outermost as in the current flag). Also, its stars have seven points each (instead of the current five) and the blue canton is wider (higher) than on other flags, spanning nine instead of seven of the thirteen stripes.