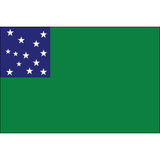 The Green Mountain Boys Flag began as a regimental flag, and still is today because of the Vermont National Guard unit.

The Green Mountain Boys were a militia organization first established in the late 1760s in the territory between the British provinces of New York and New Hampshire, known as the New Hampshire Grants (which later became the state of Vermont). Headed by Ethan Allen and members of his extended family, they were instrumental in resisting New York's attempts to control the territory, over which it had won de jure control in a territorial dispute with New Hampshire.

$39.50
Granite State flags are available with both indoor and outdoor finishes to suit your flag needs.  Outdoor New Hampshire Flag These flags are made to resist the outdoor elements. The lightweight...
Options Quick view

$39.50
Celebrate the Empire State with the New York Flag! Famous for its city that never sleeps, vast forests, and picturesque mountains. This is the State of New York's flag, not to be confused with the...
Options Quick view