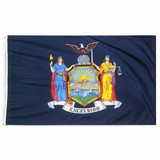 Celebrate the Empire State with the New York Flag! Famous for its city that never sleeps, vast forests, and picturesque mountains. This is the State of New York's flag, not to be confused with the flag of New York City, which we also have.

Outdoor New York State Flags can be displayed in the Big Apple, atop a mountain, or at a NY waterfront. Our New York flag is made out of lightweight nylon for easy flying even in the slightest of breezes.

Heavy-duty white canvas header and brass grommets to improve longevity. Learn more from our life span of a flag blog

Indoor New York flags are designed with a matching navy sleeve and gold fringe. The pole sleeve is used indoors, instead of grommets, and slides onto any of our indoor flagpoles. We also carry New York City flags for indoor use. For a proper display, mount your New York flag on an oak indoor display pole.

New York State's flag has remained relatively unchanged in the nearly two and a half centuries of use. It shows the coat of arms of New York, dated 1778, as a symbol of American revolutionaries. The flag was also designed that year and has only undergone one significant change since changing the yellow to a blue background in 1901. In April 2020, the motto "E Pluribus Unum" was added below the original motto "Excelsior."

The New York Coat of Arms symbolizes New York’s importance as a major center of America and that of America as a whole, symbolically uniting the old world and the new.