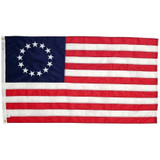 This flag Betsy Ross flag is constructed of embroidered stars and sewn stripes.

Since the turn of the 20th century, the Betsy Ross flag has come to embody popular American patriotism perhaps more than any other flag. And it’s easy to see why: the legend of Betsy Ross and the flag of the 13 colonies is about as American as it gets. As the story goes, Betsy Ross was a seamstress working in Philadelphia, already well-known in revolutionary circles for her tents, uniforms and flags. When the founding fathers needed a flag to represent the colonies in congress, they came to Betsy with their design. Betsy was happy to oblige, and she did not disappoint. She did, however, make one simple but crucial change: she took the stars from six points down to five, which made them easier to sew.

Although this legend has since been refuted and is likely an embellishment of history, it remains an endearing story that is woven into the fabric of American lore. And whatever its origin, the Betsy Ross flag is today one of the most famous and distinctive flags in existence - a true classic and an essential flag for any patriotic American collector.

When it comes to design, the Betsy Ross flag is quintessential Americana. A circle of thirteen five-pointed stars, brightly contrasted against a royal blue backdrop, represents each of the thirteen original colonies. Stars were chosen to represent “the new constellation” of America, along with thirteen red and white “rebellious stripes.” These stripes were a direct callback to earlier colonial flags flown by the first major American cities, places like Boston and Philadelphia. (It is thought that the 1765 Sons of Liberty flag was a direct influence on the Betsy Ross design.)