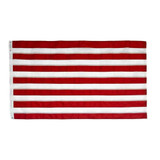 The Sons of Liberty have been known as the original American Patriots. Some of America's Founding Fathers worked with the Sons of Liberty, and the organization is best known for its involvement in the Boston Tea Party. Their flag became as iconic as they did, serving as the basis for many other flags for the unified rebellious American colonies. This American patriot's flag design is 100% authentic and made in the USA!

Our Sons of Liberty flag is 100% nylon, lightweight and durable so that you can show off your patriotism in all kinds of weather. Its durable, authentic print keeps the colors vibrant, even under heavy sun.

Your new Sons of Liberty flag can securely attach to your liberty pole (or outdoor flagpole) with a strong canvas header with brass grommets.

The Sons of Liberty flag is available in our best-selling 3’ x 5’ size and is:

"No taxation without representation!" was a common phrase heard among the early American revolutionaries and rebellious groups like the Sons of Liberty. The Sons of Liberty became a hotbed for the most revolutionary spirits among the patriot groups. Men who later became instrumental in early America worked with the group. Such members included: Samuel Adams, John Hancock, Paul Revere, Christopher Gadsden, Hercules Mulligan, and Patrick Henry.

The Sons of Liberty flag was also known as the "rebellious stripes flag" and was adopted as the group logo in 1767. It flew from the famous "Liberty Pole" in Boston after the British cut down a tree (the Liberty Tree) that served as the Sons of Liberty's main meeting place.

The Sons of Liberty flag was adopted and changed slightly by many other revolutionary groups. The American colonies' navy flew a slightly changed version throughout the war. The first-ever unified colonies' flag included the 13 red and white stripes, and flags like the First Navy Jack flag also honored this flag.

Though the original version of the Sons of Liberty flag included only 9 red and white stripes, later versions included the 13 stripes. Those, of course, ended up as the basis for the American flag we know and love today.

Liberty flags were used by the Colonies to protest the Revolutionary War. The nine stripes in this flag represented the nine colonies that participated in the Stamp Act Congress of 1765. These colonies included Massachusetts, Connecticut, Rhode Island, New York, New Jersey, Pennsylvania, Delaware, Maryland, and South Carolina.

$39.50
Show your love for the Constitution State by flying this Connecticut State Flag. Available in all customary sizes, you can select an option that best fits your own aesthetic and needs. Outdoor...
Options Quick view

$39.50
Fly this Delaware State Flag to represent the first state ever to ratify the U.S. Constitution. Choose from one of our outdoor or indoor flags to best suit your personal requirements.  Delaware...
Options Quick view

$39.50
“Liberty and Prosperity” Represent the Garden State with this New Jersey State Flag. These flags come in all standard sizes to fit any indoor or outdoor flagpole. Need something bigger? Just contact...
Options Quick view

$39.50
Celebrate the Empire State with the New York Flag! Famous for its city that never sleeps, vast forests, and picturesque mountains. This is the State of New York's flag, not to be confused with the...
Options Quick view

$39.50
Show your pride for the Commonwealth of Pennsylvania by flying this authentic Pennsylvania State flag. This official state flag is enriched with history from the Coat of Arms dating back to the...
Options Quick view

$39.50
Celebrate the Ocean state with this Rhode Island State Flag. Our nylon flags come finished for both indoors and outdoors, depending on your flagpole needs.  Outdoor Flag Outdoor Rhode Island...
Options Quick view