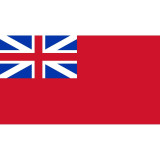 In 1707, Acts of Union, ratifying the Treaty of Union that had been agreed the previous year, were passed by the parliaments of England and Scotland, thereby uniting the Kingdom of Scotland with the Kingdom of England (which included the Principality of Wales) into a new state with the name Great Britain. This resulted in a new red ensign which placed the first Union Flag in the first quarter. The new design of the Red Ensign was proclaimed by Queen Anne, who indicated that it was to be used by both the navy and ships owned by "our loving subjects." This was the flag that flew over the thirteen American colonies before the American Revolution and was a precursor to the flag of the United States.

$54.50
Fly the Union Jack to commemorate the rich history and legacy of the United Kingdom with this ultimate-quality nylon U.K. Flag! Exhibit it in your classroom for history days, fly it at your business...
Options Quick view