Commodore Perry - Don't Give Up The Ship! Flag 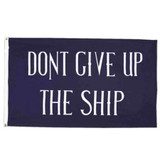 “Don’t Give Up the Ship!” This dramatic rallying cry was reportedly the last utterance of Captain James Lawrence as he lay dying aboard the U.S. frigate Chesapeake. Own this incredible piece of history today with the iconic and patriotic Don’t Give Up the Ship flag (or, as you might know it, the Commodore Perry flag).

This flag doesn’t need a lot of dressing up to get its point across – it frankly speaks for itself. The words of the slogan jump to life in bright white lettering against a solid navy blue background, a striking contrast of colors that calls to mind the brave and heroic marine battles of yesteryear.

On the mounting side, this authentic historical flag is bound by a sturdy strip of white canvas closed with brass grommets. The flag’s nylon material and high-quality construction make this an ideal choice for both mounting and framing. For displaying your flag in true patriot style, consider having your Don’t Give Up the Ship flag framed, or even fly it proudly from the stern of your boat with a marine pole at low speed.

Own a remarkable piece of history today and show your faith in America with this 100% nylon Commodore Perry flag, a flag that reminds all of us proud American patriots to never give up the ship!

The meaning of the Don’t Give Up the Ship flag comes from the War of 1812. Two hundred years ago, the United States Navy was still young and had yet to prove itself to the world. Remarkable captains like James Lawrence, only 31 at the time of his most famous battle, helped bring glory and honor to the United States Navy, helping to cement America’s reputation as one of the most powerful military forces in the world.

A year into the War of 1812, Captain Lawrence’s ship the U.S. Chesapeake fought the British frigate Shannon and the rest, as they say, is history. After only 15 minutes of fighting, 228 men were killed or wounded. It was the bloodiest and most intense maritime combat of the entire war. Lawrence took heavy fire almost immediately and died surrounded by loyal sailors and commanders. It was during this chaotic exchange of fire that Captain Lawrence gave his now famous command.

Though Captain Lawrence and the U.S. Chesapeake ultimately lost the battle that day, they won the hearts and minds of Americans and true patriots for centuries to come.