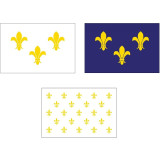 The fleur-de-lis (or “lily flower” in French) is one of the oldest and most popular symbols seen on flags today, dating back to the French revolution. Today the French Fleur-de-lis flag is flown around the globe and commonly used in Mardis Gras celebrations. This historical flag is a great way to celebrate the history of the U.S. & France.

This 3’ x 5’ American made fleur-de-lis flag has a durable heading and brass grommets, so it can be flown on an inground flagpole or even a 6’ house pole. Each of our top-notch fleur-de-lis flags are made from 200 Denier quick-drying nylon -- an excellent choice for every-day flying. Choose from three authentic designs, each with their own exquisite detailing and top-of-the-line design:

This French royal blue fleur-de-lis flag is the official flag of the French renaissance, and was brought to the Americas by early colonists and explorers. To this day the fleur-de-lis remains the official state symbol of Louisiana, a colony of the French. It features a rich blue field and three stylized gold fleur de lis arranged in a staggered pattern in the center of the flag.

Viva la resistance! This white fleur-de-lis flag is an unofficial flag of the French revolution, flown by the French Royalists. It features a bright white backdrop and three stylized golden fleur-de-lis flowers arranged in a staggered pattern.

This flag is sometimes called the French 23 flag. Featuring a white background and 23 golden fleur-de-lis flowers strewn across the banner, this flag can be used to show solidarity with New Orleans, with revolution or even with the Catholic church.

Some highlights of all our 3’ x 5’ French monarchy flags include:

HISTORY OF THE FLEUR-DE-LIS FLAG

The fleur-de-lis flag is one of the most recognizable and celebrated flags in all of Europe. The origins of the famous stylized lily are lost to history. Still, it’s thought that the lily originally symbolized purity and virginity. Some of the earliest fleur-de-lis flags were used by the Catholic church in France.
According to historians, each petal of the fleur-de-lis represented one of the three social classes in medieval France:

It’s also thought to represent the holy trinity itself. While closely associated with the French monarchy, the fleur-de-lis is also used throughout the world in military, sporting, and scouting events - especially those with French ties. New Orleans Saints, anyone?

During the age of exploration, the French were early colonizers of America. Many of these early conquests later fell to the Spanish and British empires, but the French made a lasting cultural impact - so deep that many of our major cities were early French colonies, and much of modern American English is, in fact, French. Today, about 13 million Americans are of direct French descent, and French is the second-most spoken language in Louisiana, Maine, New Hampshire, and Vermont. The fleur-de-lis is still flown proudly today in places like New Orleans, where it symbolizes the city’s rich French history and spiritual depth.

Joan of Arc carried a white banner that showed God blessing the French royal emblem, the fleur-de-lis, when she led French troops to victory over the English in support of the Dauphin, Charles VII, in his quest for the French throne. The Roman Catholic Church ascribed the lily as the special emblem of the Virgin Mary. Due to its three "petals," the fleur-de-lis has also been used to represent the Holy Trinity. Military units, including divisions of the United States Army, have used the symbol's resemblance to a spearhead to identify martial power and strength.

$43.90
Celebrate France, with this beautiful and iconic flag of France – also known as the French tricolor. The iconic tricolor pattern – and indeed the colors red, white and blue - has been famously...
Options Quick view

$39.50
The Army is the United States' oldest military branch. It was formed one year before the country was founded, making the Army older than the United States itself! Celebrate the great heritage and...
Options Quick view