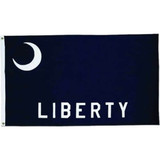 On September 13, 1775, Colonel Moultrie received an order to take Fort Johnson, South Carolina. He had this flag made, for the troops wore a silver crescent on the caps inscribed 'Liberty or Death.' 'This was the first American flag displayed in the South,' he said. On June 28, 1776, the crescent flag, with LIBERTY across it, was raised at his defense of Sullivan's Island, later Fort Moultrie. This flag greatly influenced the South Carolina flag.