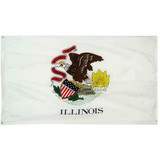 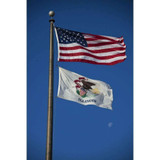 Represent your admiration for the Prairie State with this Illinois flag. This state flag is made in America and comes in all standard flag sizes.

This state flag is made with quick-drying nylon that is made to endure rainy weather. With its lightweight design, this flag will catch air in even light winds. The premium, heat-resistant digital print is done to keep your Illinois flag looking like new even under heavy sunlight.

Note: Check out our tips on how to extend the lifetime of your flag.

While our outdoor flag looks great both indoors and outdoors, you can upgrade your indoor flag to have gold fringe. This option elevates your indoor flag for a more formal display. Give this flag the respect it deserves by hanging it on one of our indoor flagpoles.

Note: Gold fringe is not designed to withstand the outdoor elements.

When was the flag designed?

In 1914, a contest was held for flag designs. A woman named Lucy Derwent was the winner and her design became the official state flag in 1915.

Was the flag ever altered?

What is the meaning of the Illinois flag?

This flag features the Great Seal of Illinois, which was designed to resemble the United States Seal. It features the date when Illinois became a state - 1818. The date 1868 is also on the seal, which is the date in which there was a redesign of the Great Seal. The seal also features an eagle and the state’s motto: State Sovereignty, National Union.