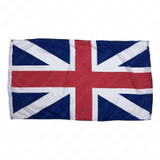 Acknowledge the efforts made by the British to establish and colonize America with the King's Colors Flag!

1606 - 1801 This is the first known reference to the Union Flag. Although the original design referred to has been lost, it is presumed that it was the flag which, with the addition of the Saint Patrick's Cross, forms the basic design of the British Union Flag today. It is also interesting to note that the new flag was not universally popular nor accepted. The English were not overly pleased at the obscuring of the white field of the St George's flag. The Scots, with more justification, were upset at the fact that the red cross was laid over the white. The Scots proposed a number of alternative designs.