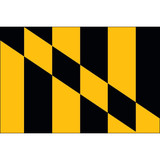 If you're from Maryland, add this flag to your collection, as the Lord Baltimore Flag was flown over Maryland from the 1600's to the Revolutionary War!

The Lord Baltimore flag combines the black and gold family arms of the lords Baltimore, the colonial proprietors of Maryland, granted to the first Lord Baltimore - George Calvert in 1622. This flag was used to represent Maryland from the 1600's until the Revolutionary War when the United States was born and a national flag was used. Through the years various banners were used to represent the state, although none was adopted officially as a state flag. The State of Maryland did not adopt an official state flag until 1904, and that flag incorporates Lord Baltimore's colors in two quadrants.

$39.50
Celebrate the home of the United States Naval Academy, Baltimore sports, and the Chesapeake Bay with the Maryland State Flag. Maryland is a state close to our hearts here at Flags.com; it where our...
Options Quick view