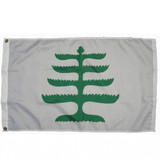 Commemorate early America with this American-made historical flag. The Pine Tree flag, also known as “An Appeal to Heaven,” flag has become a lasting American history image. This simple pine tree design is one of the first - not originally a flag of the American Revolution, but one used since the 1600s to represent the British Colonies, especially Massachusetts. The pine tree became a symbol of British colonial tyranny as well as this flag.

This Pine Tree flag is made in America out of lightweight nylon, designed for everyday use. This authentic flag is excellent for outdoor use in New England rain and sun, with a moisture-resistant construction and a heat-resistant long-lasting print.

The 3’ x 5’ Pine Tree Flag will securely attach to an outdoor flagpole with a canvas header and brass grommets.

The original Pine Tree flag has been in use since the 16th century and later became a symbol of America as it has developed over time. The British colonial masters attacked the New England white pine - Great Britain was cut down, and the lush American wilderness heavily deforested in the mid-17th century. This became another grievance among the many raised by the proto-American revolutionaries against the colonial masters.

In New Hampshire, American farmers forced British law enforcement out of their town in defiance of British laws restricting the possession of certain types of pine. This was just one of the many protests by my American colonists. The pine was then adopted as a symbol of the American patriot group Sons of Liberty and finally became a symbol of the Continental Army of George Washington.

The pine tree remains a major symbol of New England, and is still included on Maine’s state flag, recognizable to the original pine tree flag.

The men of various towns banded together into secret societies known as "The Sons of Liberty". They customarily held their meetings under a large pine tree on the village green. The British General Gage, after hearing of this ordered the tree cut down. Much to his regret the tree then became a symbol of resistance in Massachusetts and throughout the colonies. Various militia units proudly adopted the pine tree for their regimental colors.