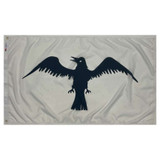 A raven flag similar to this one could have been the first flag flown by Europeans over American soil. Own a piece of early American history with this high-quality American-made Raven flag!

Our replica Nordic Raven Flag is made in America out of 100% nylon to show your explorative spirit, in the rain, sleet, snow, and sun. Its weather-resistant nature will make sure the elements don’t get to it, and its lightweight materials make sure it’ll flap majestically, even if it’s not on a sea breeze.

It’ll easily attach to your outdoor flagpole snugly and securely with a strong canvas header with brass grommets.

Our American-Nordic Raven Flag is available in our best-selling 3’ x 5’ size and features include:

Contrary to popular belief, the first Europeans to visit the Americas were not Christopher Columbus and his expeditionaries. According to Viking legends, a group of explorers led by Leif Erikson discovered and settled in Vinland, now known as Newfoundland, around the year 1000.

Erikson also may not have been the first Viking there, because according to that same legend, he was led there by a colleague of his who had shipwrecked there. Regardless of whether the legends are true, archaeologists have found Viking settlements on Newfoundland dating back to the time around Erikson’s expeditions.

The raven shows up all over Nordic ships. The raven shows up often in Nordic mythology and became a standard for their ships, the banners featuring it known as hrafnsmerki. Due to the nature of Erikson’s expedition and the extremely degraded remains of the Viking settlements found on Newfoundland, it’s unverifiable if the Raven flag actually flew on American soil.

Considering the time period and Erikson’s explorative nature, he likely would have brought a raven banner on at least one of his ships, and it’s just as likely that it was planted in the soil of Newfoundland. So the Raven flag could be the first. It’s more fun to imagine it was anyway.

"... That the flag actually bore a raven is evident from the illustrations on coins of the tenth century which have been found in England and Ireland. These coins also clearly show that the shape of the flag was an irregular triangle, not the rectangle which modern artists use in illustrating 'the Viking flag.' We do not know what colors were used for the raven and border of the flag, but the field was white." From: Smith, Whitney, The Flag Book of the United States, 1975, p. 11 Jon Radel, 28 April 1998

$43.90
The luck of the Irish will be all yours when you fly the mighty Flag of Ireland, also known as the Irish Tricolor.  Whether you’re celebrating Saint Patty’s Day or want to display your love of...
Options Quick view