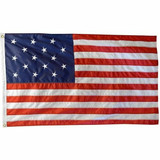 Enjoy the Star Spangled Banner Flag that was waving proudly over Fort McHenry when the British Navy attacked, and Francis Scott Key was held hostage and inspired to write the National Anthem.

In 1795, two more states joined the Union. They were Kentucky and Vermont. The United States flag added two more stars and two more stripes, thus being the only United States flag with fifteen stripes. In 1818, Congress proclaimed that one star for each new state would be added on the 4th of July following the state's admission to the union and there would be thirteen stripes representing the thirteen original colonies.

$39.50
The Bluegrass state - known for its iconic music, nature, food, horse racing, and bourbon! Celebrate all you love about the great Commonwealth of Kentucky with this American-made Kentucky state flag!...
Options Quick view

$3.95
“Those that fail to learn from history are doomed to repeat it.” Celebrate your love of  American history with one of our historical stick flags. Made in America with 100% polyester, these flags...
Options Quick view

$39.50
Celebrate the Green Mountain State with Vermont’s Flag. Outdoor Vermont State Flag These flags are made in America with premium quality nylon that is both UV and weather-resistant. Equipped with...
Options Quick view