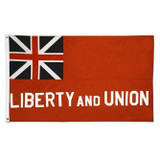 Display the first flag to represent the fight for independence from Britain, the Taunton Flag!

The original was a flag of protest and petition, actually one of many such that were raised on "liberty poles" throughout the Thirteen Colonies and particularly in New England during the five years prior to the outbreak of the Revolution.

The Taunton Flag proclaimed loyalty to the Crown, laid claim on behalf of the colonists to the rights of Englishmen, and called for a union of the colonies in the quarrel with Britain. It was probably raised with the authority of a resolution of the town meeting.