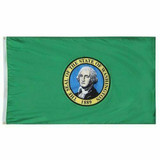 Known for its nexus of beautiful scenery, technology, and its multicultural American gem, Seattle, Washington state is what comes to mind when you think about the Pacific Northwest. Celebrate everything about this magnificent piece of America with this American-made indoor-outdoor Washington State Flag!

Our outdoor Washington flags are made of nylon with a white canvas header and brass grommets that make flying the flag easy on any one of our outdoor flagpoles no matter where you’re located. For people who live on the coast, in the mountains, or those who want to know more about our flag's durability, you can learn more from our life span of a flag blog post.

Rainy days in the Pacific Northwest won’t be a problem for this flag. Its lightweight nylon is quick to dry and will fly majestically, even in a light breeze. Our Washington state flag’s high-quality screen print will stand up to heat and retain its color admirably for sunny days.

See the chart below to determine what size flag and flagpole suit your needs.

The indoor Washington State flags are designed with a gold fringe border and a green sleeve designed to slip on an indoor flag pole to blend naturally with the flag itself. Nothing honors the Evergreen State like mounting your Washington flag on an oak indoor display pole.

Respect the fringe. Please don’t post indoor flags on the wall. Indoor flags come in select sizes. See the chart below to determine what size flag and pole is right for you.

Washington became a state in 1889 but didn’t adopt this flag until 1923. The Washington Chapter of the Daughters of the American Revolution designed this flag in 1915, basing it off a popular design used throughout the state featuring a likeness of the first president, George Washington.

After the flag’s adoption in 1923, it underwent color standardization throughout the next several years and was finalized to its current color in 1967.