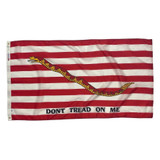 Our First Navy Jack flag has got you covered, whether you plan on flying it in the open ocean or outside your home or office. The lightweight nylon and long-lasting digital print stand up to surf and sun, while flying majestically in even the lightest of breezes.

*Flagpole not included. Your 3’ x 5’ First Navy Jack flag will easily attach easily to any of our outdoor flagpoles with its sturdy canvas header with brass grommets.

When was the First Navy Jack flag created? Historians, as always, debate the actual validity and history of this version of the First Navy Jack flag. What we do know is that Commodore Esek Hopkins of the Continental Navy instructed his navy vessels entering the Delaware River at the beginning of the American War of Independence to hoist a flag with 13 alternating red and white stripes. Additional correspondence between Benjamin Franklin, John Adams, and Sicilian allies describe a naval jack featuring the similar 13 stripes with a gold rattlesnake.'

That rattlesnake had long been a symbol of American resistance to the British, originating with Franklin’s famous 1754 "Join, or Die” political cartoon and eventually immortalized as the Gadsden flag. The “Don’t Tread on Me” phrase originated around the same time but wasn’t applied to the rattlesnake naval jack flag until 1880.

The flag’s celebrated the United States’ bicentennial with an updated design in 1976. It had another run through the 2000s and was just recently removed as the standard U.S. Navy Jack flag in 2019. The First Navy Jack flag remains in service on one ship: the world’s oldest actively commissioned vessel still afloat, the USS Constitution.

The First Navy Jack flag consists of a rattlesnake, superimposed across 13 horizontal alternating red and white stripes with the motto "DONT TREAD ON ME". The jack was first employed by Commodore Esek Hopkins in the fall of 1775 as he readied the continental navy in the Delaware River. His signal for the whole fleet to engage the enemy was the striped jack and ensign flown at their proper places. On the 31st of May, 2002, the Secretary of the Navy has directed all US naval ships to fly the First Navy Jack for the duration of the war on terrorism, beginning September 11, 2002 (Patriot Day.)

$59.50
The Gadsden flag, both a comic illustration and a serious philosophy, is instantly recognizable as one of America’s oldest and most patriotic symbols. Since its inception in 1775 during the American...
Options Quick view