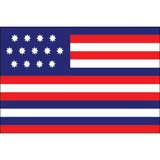 Fly the Serpais flag that was flown from the captured British frigate, Serapis, in the war of Independence.

At the 1779 Battle of Flamborough Head, U.S. Navy Captain John Paul Jones captured the Serapis, but his own ship, the Bonhomme Richard sank, and her ensign had been blown from the mast into the sea during the battle. Jones, now commanding the Serapis without an ensign, sailed to the island port of Texel, which was run by the neutral Dutch United Provinces. Officials from the United Kingdom argued that Jones was a pirate, since he sailed a captured vessel flying no known national ensign. This flag was used to help Jones avoid charges of piracy when he captured the Serapis under an "unknown flag". This flag is also known as the "Franklin Flag" due to its description by Benjamin Franklin.

$3.95
“Those that fail to learn from history are doomed to repeat it.” Celebrate your love of  American history with one of our historical stick flags. Made in America with 100% polyester, these flags...
Options Quick view