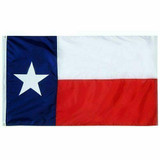 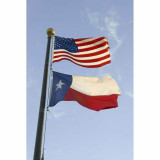 About the Texas Flag

The authentic Texas flag, once the standard of a nation, is one of the most identifiable state flags. Everyone will immediately know that you are a proud Texan when you display this American-made flag. With a state motto of “friendship,” you can extend that welcome to everyone by hanging this stunning flag at your home or business.

The second-largest state in the nation has a remarkable history of rallying under the Lone Star flag. With famous battles like the Alamo strengthening the resolve of Texans, this flag symbolizes both the rural cattle lands and the sprawling metropolitan cities within its borders.

The Lone Star Flag, so named because of the single white star in a blue field, was adopted in 1839 by the Republic of Texas. When Texas became the 28th state in 1845, its national flag became the state flag.

The original Texas flag was the Burnet flag- a solid field of blue with a single yellow star. The Lone Star symbolized the solidarity of all of Texas united, declaring independence from Mexico. That solitary star was carried onto the current design. The colors of the flag, just like the American flag, carry heavy symbolism:

All of our Texas flags are made in America. We offer sizes from 12" x 18" up to the massive 20' x 38'! No other state flag is available in sizes as large as this Texas flag is! For areas with particularly heavy winds, we suggest the polyester Texas flag.

How to Hang a Texas Flag

The Texas flag can also be hung vertically. The blue stripe with the white star is at the top and the red stripe should be to the viewer’s right. Using an adjustable bracket will allow you the freedom to choose the angle for Texas flag flying that is appropriate for you.

The Lone Star state also adopted a pledge of allegiance in 1933.

"Honor the Texas flag; I pledge allegiance to thee, Texas, one state under God, one and indivisible"

There is an urban legend that the Texas flag is the only state flag allowed to fly at the same height as the US flag. This is not true.

For information on how long your flag should last and how to increase its lifespan, check out our blog on flag care.