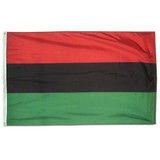 Show your pride for history with this Afro American Flag!  Other names for this flag include Pan-African flag, the UNIA flag, Black Liberation flag, and various others

The meaning of the colors are as follows:  Red is for the blood that unites all people of Black African ancestry, and shed for liberation; black is for black people whose existence as a nation, though not a nation-state, is affirmed by the existence of the flag; and. green is for the abundant natural wealth of Africa. When the flag is displayed vertically against a wall, the red band should be to the left of the viewer with the hoist or the cord seam at the top.

The Universal Negro Improvement Association and African Communities League (UNIA) formally adopted the Afro American Flag on August 13, 1920 during its month-long convention. Variations of the flag have been used in numerous countries and territories in Africa and the Americas to represent Pan-Africanist ideologies. Afro American countries include: